Hidden away in an isolated section of greenery called Fort Fish stands a stone bench in memory of Andrew Haswell Green, Central Park comptroller during the 19th century. Although the name Andrew Haswell Green may not be as readily recognizable as Olmsted and Vaux, he actually played a significant role in the Parks system.
First and foremost, he became known for his influential role in the unification of New York City, merging all five boroughs to make up Greater New York.
For this achievement he was crowned the "Father of Consolidation," yet he was also responsible for making the Parks Commission an instrumental force in city planning.
The level of his commitment to beautifying the City culminated with the beginning of Central Park. In 1857, the Central Park Commission was established and given control of the Park. Led by Green, this was the City’s first planning agency.
They decided to establish a contest to determine who would design the Park.
The winners of course were Frederick Law Olmsted and Calvert Vaux, who worked together to create The Greensward Plan.
Green’s foresight of the Park system’s relationship with the municipal development of the City was integral in the successful completion of Central Park.
Other significant institutions he helped create are the New York Public Library and the Bronx Zoo. He met his untimely death in front of his home on Park Avenue when he was shot and killed, by a murderer who mistook him for someone else.
In November 1998, five Maple trees - one for each borough were planted at this site in honor of Green. 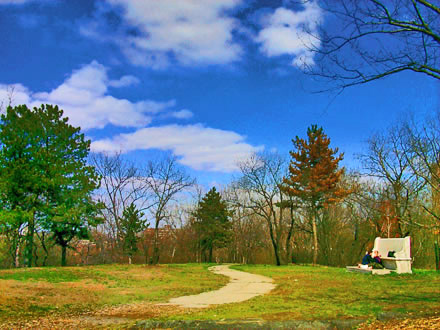 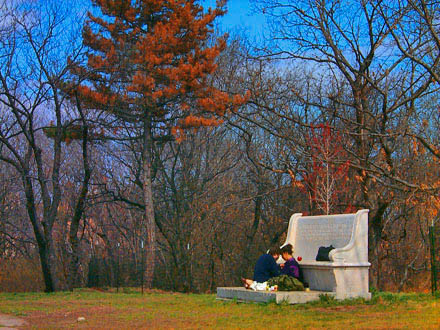