Located high above the cove of the Harlem Meer at the north end of Central Park and directly behind the Conservatory Garden is the Mount, ta barren area that is currently used as the site of the Park’s chief composting operation. Here, leaves and branches are collected to be recycled into plant food. Rarely visited, few people really notice the remains of an old foundation wall from a bygone era.
In 1750 a tavern was built on this site. In 1759 it was sold to Catherine McGown, the widow of a Scottish sea captain. The adjacent road running along the north slope was renamed McGown’s Pass. Gentlemen riding on horseback through the pass would frequent McGown's Pass Tavern and it became a favorite watering hole.
Catherine and the subsequent generations of McGown’s operated the tavern until the 1840s when the Sisters of Charity of St. Vincent de Paul purchased it. By the mid-1850s, seventy sisters belonged to the convent, which ran a boarding academy for two hundred young ladies. The facility included a sizable brick chapel and refectory. Everything changed in 1858 when the New York State legislature approved the acquisition of the land for Central Park.
Realizing their days at the Mount were numbered, the sisters moved to the Bronx where the convent and school still flourish. For a short while the vacated buildings were used by the park commissioners for offices, but were then made into military hospitals during the Civil War from 1861 to 1865.
Ironically, after the war the old wooden building became a tavern again, while the chapel was modified into a statue gallery featuring the works of Thomas Crawford, a notable American sculptor of that era.
In the decades to follow, the tavern became a hangout for politicians and wealthy sportsmen like William H. Vanderbilt and August Belmont.
Change occurred again when a fire in 1881 destroyed the Mount St. Vincent buildings, an event which fueled an even greater resurrection called appropriately,"McGown’s Pass Tavern".
During the early 1900s, the tavern prospered with wealthy Manhattanites, but the years prior to World War I saw its popularity fade. In 1915,
the city ousted the lessee of the property and auctioned off all its artifacts. In 1917, the tavern like so many historical sites in New York was torn down for the last time.
The city government of New York has fondly provided us the ruins of a brick retaining wall and a compost heap as a recollection of things past. A plaque commemorating the first home in New York of the Sisters of Charity of St. Vincent de Paul can be found within a rock on the left side of the path opposite the Meer’s cove. 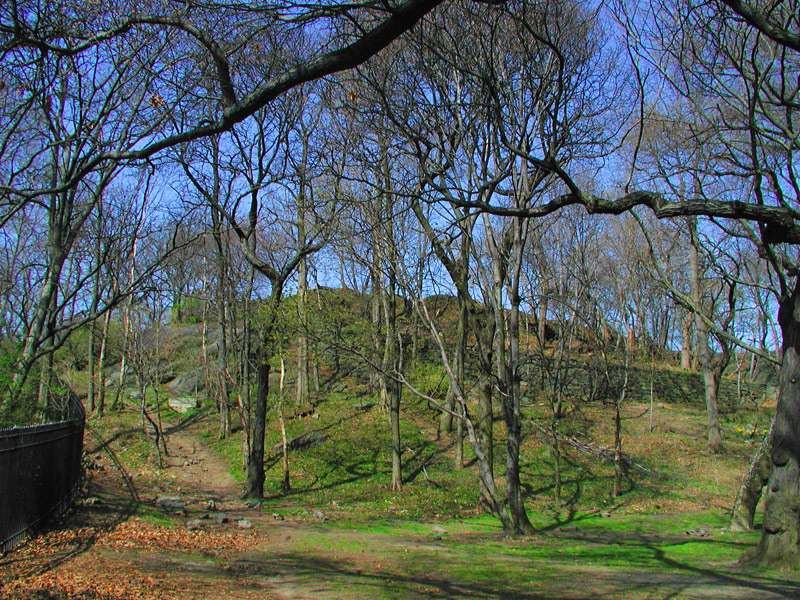 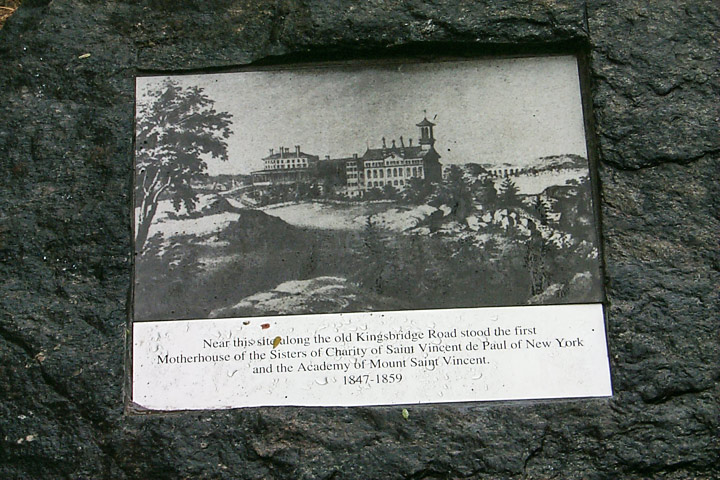