One of the most significant sports events conducted in New York City is undoubtedly the New York City Marathon.
Founded in 1970 by Fred Lebow and the New York Road Runners Club, the first annual New York City Marathon was held in Central Park. At that time, the race’s course included continuous loops around the Central Park Drive, until 1976 when the route was revised to include all five boroughs. The only feature that did not change was the finish line ending in Central Park near Tavern on the Green. Over time its popularity has grown from just 127 runners in 1970 to over 30,000 runners, representing 113 countries from around the world.
Every November, participants brave the sometimes cold and harsh weather to go the distance of 26.2 miles to prove to themselves that they are all winners. As the runners struggle to fight fatigue and thirst, many thousands of family members, friends and well-wishers line the avenues and paths, cheering and waving to help motivate and encourage them to continue onward. November 2000 was the first time that wheelchair athletes were given a competitive wheelchair division of their own.
For entry information contact the New York Road Runners Club (212) 423-2248. 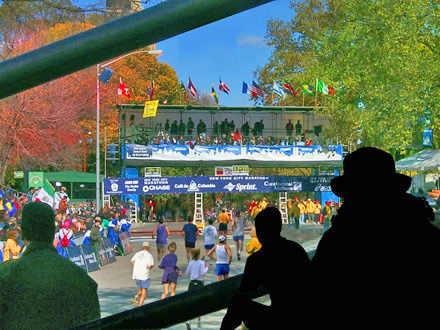