Named after the sister of Averell Harriman, the late governor of New York State, Mary Harriman Rumsey this spacious playfield with its sand surface is a large rectangular space used for school sports for most of the year. At other times it is the home to the Summerstage, which presents a varied catalog of free musical concerts in Central Park.
Located at the northeast end of the Mall it replaced an original design of Calvert Vaux, a two room stone cottage called the Ladies Refreshment House. With the soaring popularity of this spot it slowly evolved with some elaborate additions into The Casino as it was then named. In 1928 it was taken over and transformed into a fashionable nightspot and hangout of Mayor Jimmy Walker and his political cronies. The depression put an end to the party and many New Yorkers burdened by the weight of the trying times saw the spot as a symbol of New York decadence and the overindulgence of the privileged.
With the election of the vehement reformist Fiorello La Guardia to the mayor's office the end came swiftly for the nightspot when his nearsighted Parks Commissioner Robert Moses had it torn down and replaced by the Rumsey Playground. Ill conceived it was far too inconvenient a location for nannies and when it remained unused it was replaced by an open field in the 1980s.
Guarded by two small sculptures, Snow Babies by Victor Frisch, its entrance, with the statue of Mother Goose, is probably its most interesting feature. 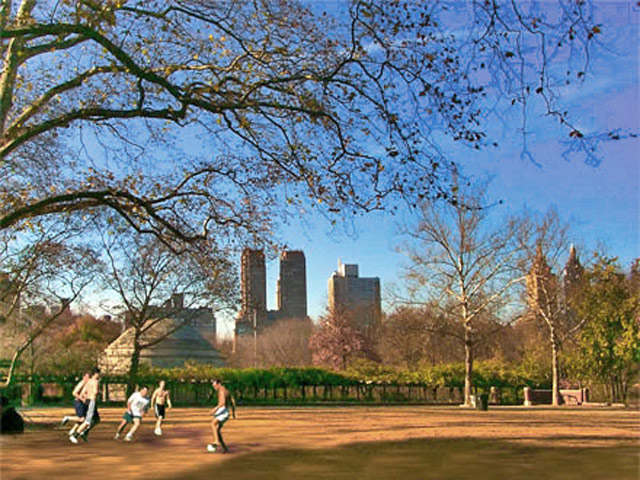