Providing the shade, which protects the black and white tiled mosaic from the direct glare of the sun, are a cathedral of American Elms. A gift of Naples, Italy it is a reproduction of a Pompeii mosaic. Inscribed At its center is the word "IMAGINE."
If we could imagine a peaceful place in Central Park it would be Strawberry Fields, a small 2.5-acre stretch of hilly landscape directly adjacent to the Dakota where John Lennon (1940-1980) lived with his wife Yoko and his son Sean when his tragic and untimely death turned this area into a shrine to his memory.
One can easily imagine John and his family visiting this area of the Park since he often strolled here feeling the same reflected sentiments as others who might take the same route through this spiritually enveloping atmosphere. Hardly a day passes when visitors do not leave tributes of flowers and photographs or candles on the mosaic to honor his memory.
In 1981, this parcel of land was named after the Beatles song "Strawberry Fields" and for an orphanage in Liverpool, England where as a child Lennon played with the children who lived there. It was restored with a $1 million dollar endowment from Yoko Ono.
Inviting nations to send plants and trees to replace the ones that were diseased Yoko inspired tremendous worldwide interest in the project and under the direction of Bruce Kelly (1948-1993), a renowned landscape architect and Park scholar, proceeded to transform a shabby terrain into a true "Garden of Peace" as it is now known.
On October 9, 1985, John Lennon's birthday, Strawberry Fields was dedicated in his honor. A bronze plaque on the hill behind the mosaic lists 121 countries that have endorsed it as a Garden of Peace.
There are over 161 plant species introduced into this area representing the various nations of the United Nations.
Behind the mosaic is a hill named Rose Hill, for the roses that grow out of its rocky crevices. It is in fact a loop which circles back around to the site of the tiled shrine. Directly behind the foot of the loop is the Woodland Wildflower Meadow, a favorite spot for bird watchers and flower lovers.
To the north of the mosaic is the Upper Meadow. With its gently rolling hills and a wide variety of shrubs and trees including Sweet Pepper Bush, Black Locust, Horsechestnut, Holly and three Bald Cypresses that border its far northern edge, it is an ideal spot for those seeking quiet seclusion.
The northeastern slope of the hill is a woodland popular with bird watchers and naturalists. It is traversed by Woodland Walk, a narrow path filled with rhododendron and jetbead that winds its way down the wooded slope through ferns and snakeroot until it reaches the West Drive at 74th Street. 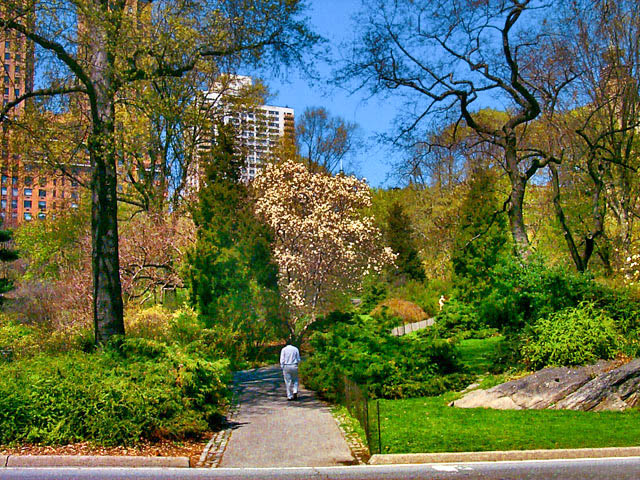 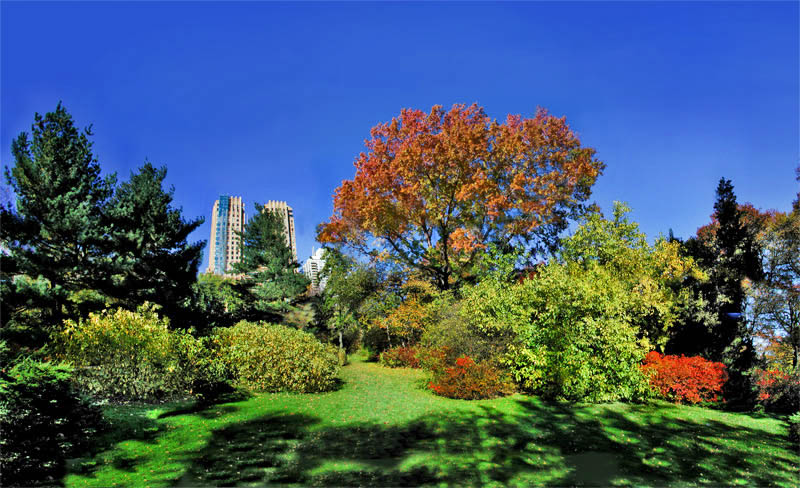 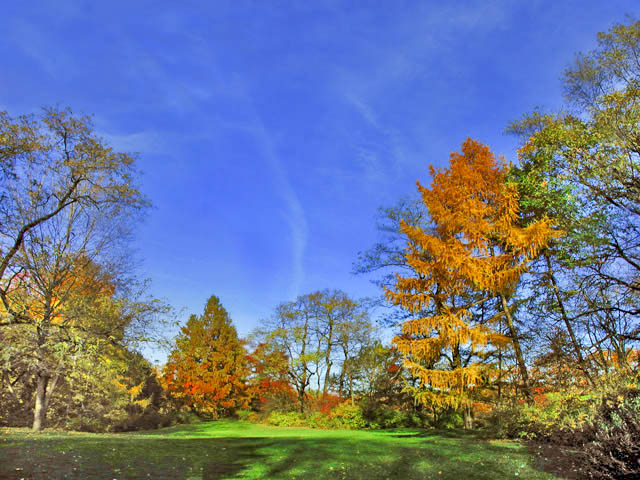 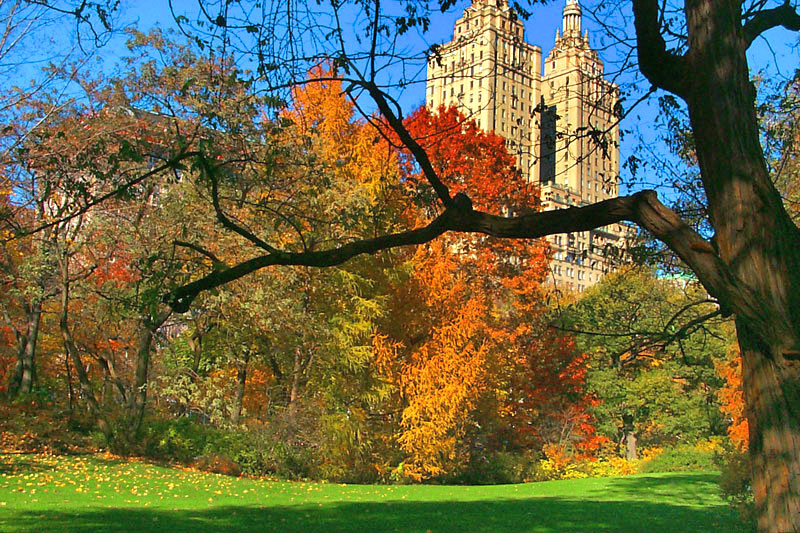 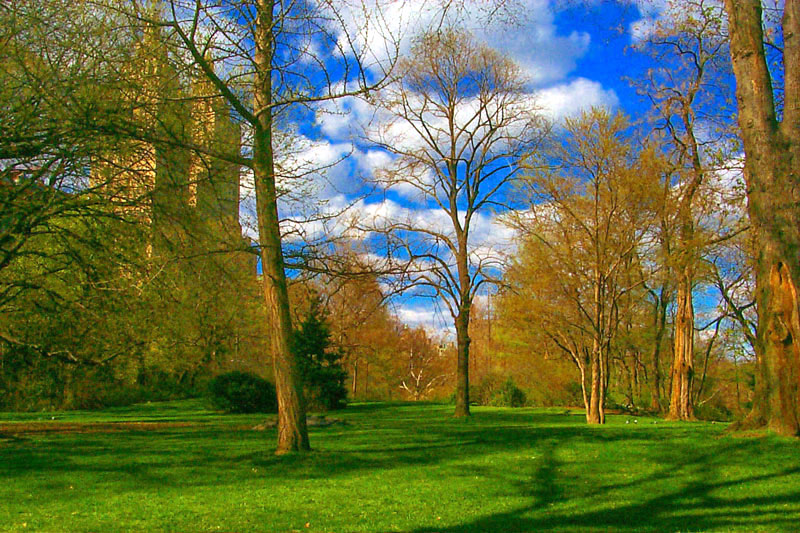 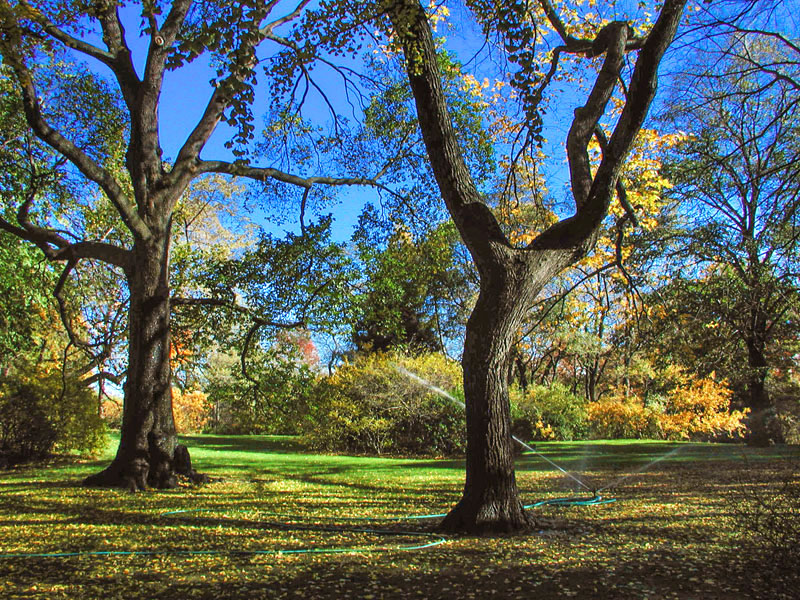 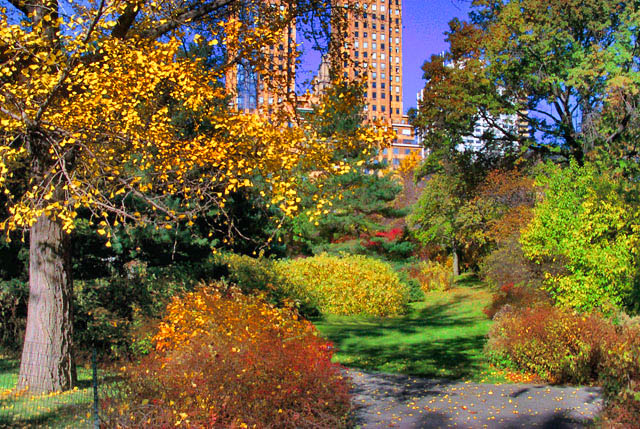