The first time a Central Park visitor looks out over the Wildflower Meadow toward the valley called the Ravine that spreads out before them they feel as if they have been transported to the shoulder of a country road into an unimagined fantasy.
Descending the grassy slope in what appears to be an unknown expanse of wilderness they are amazed to find a fabulously emerging reality. There is a stream bisecting it called The Loch and a dense forest through which it meanders called the North Woods. Filled with many species of birds, their calls mingle with the distant sound of rushing water. Lost in the wonderment of this new discovery the visitor wanders north along a main path, contained on the meadow side with a low log fence, to discover one source of this music of nature. It is a rocky cascade that sheds a stream of water over a rocky fall. Ahead is the Huddlestone Arch, which leads back into the sobering and soul shattering concrete backyard of the Lasker Pool, a relatively recent addition, which effectively destroyed the continuance of the North Woods.
Prompted to turn back from the harsh experience, the visitor once again enters the serenity of nature and stepping carefully over the stone steps that form a bridge over the cascade finds themselves staring up at the northern quarter of the North Woods, a 90-acre woodland that makes up a good part of the north western quarter of the Park.
Continuing back south along the only other path that borders the western bank of the Loch the visitor comes upon the first of two rustic bridges, Loch Bridge 31 that traverse the stream.
The second, Loch Bridge 32, is further ahead and passes over an estuary leading toward yet another arch, the Springbanks, which serves as a gateway to the North Meadow.
Continuing south the visitor will eventually reach the southern gateway to the Ravine, the Glen Span Arch and will again be met with the sound of rushing water only to be enchanted by the sight of a massive cascade high above them as they pass from beneath the arch. This source of the Loch is called the First Cascade.
Climbing to the summit of the fall we reach the northern perimeter of the Pool and the beginning of a new adventure. 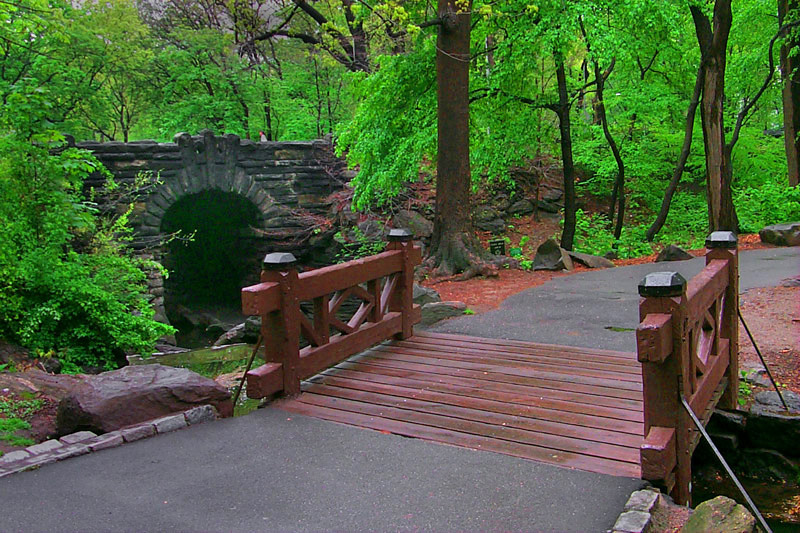 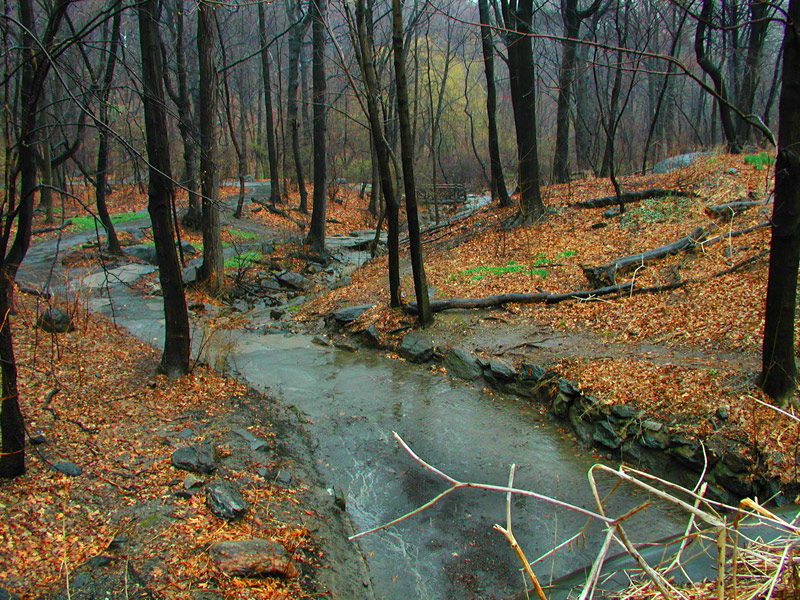 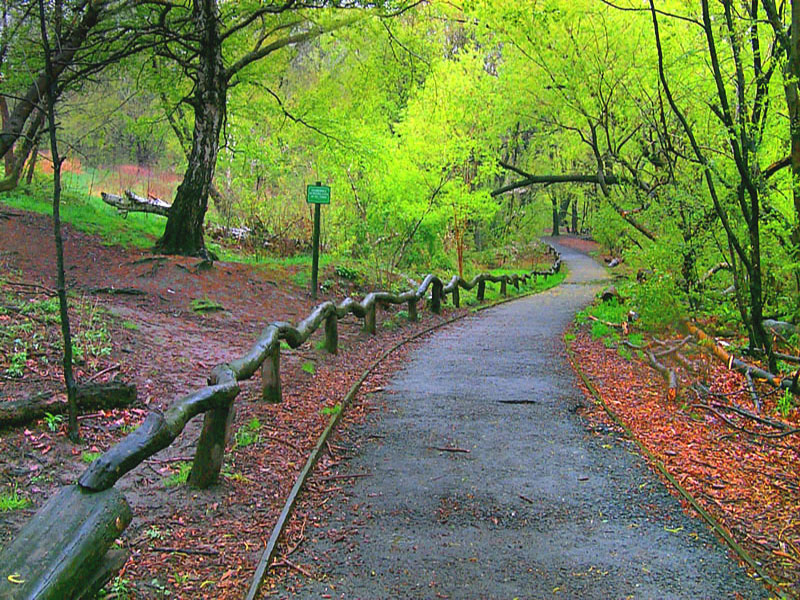 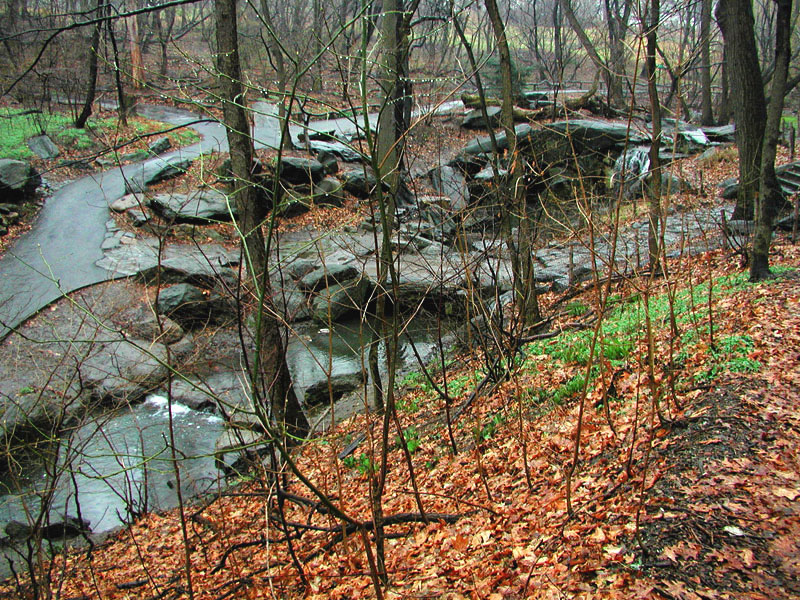 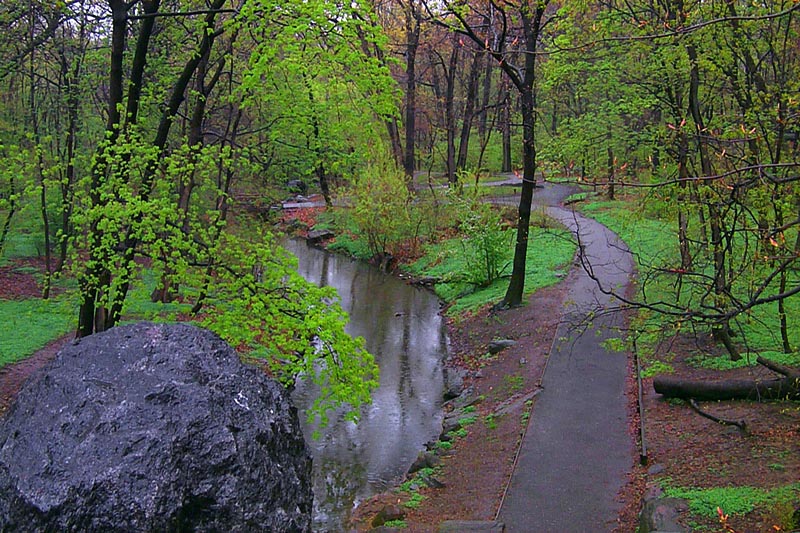 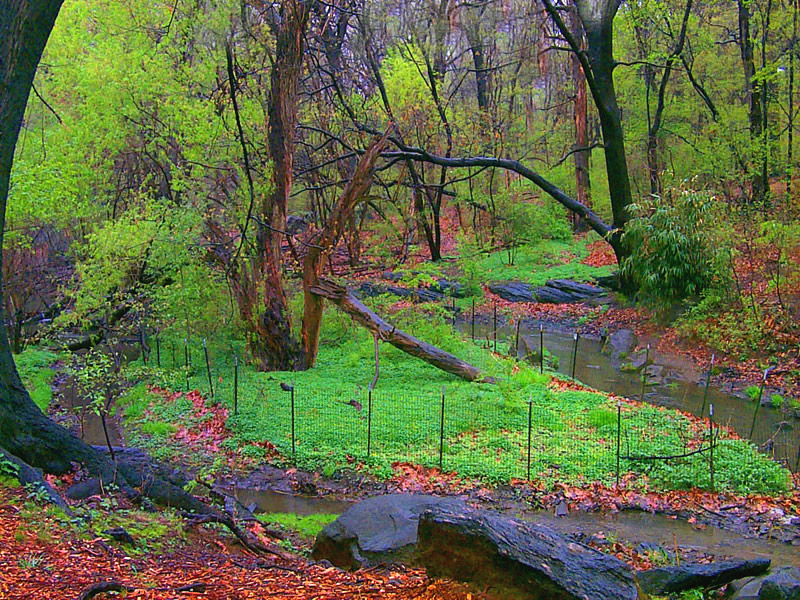 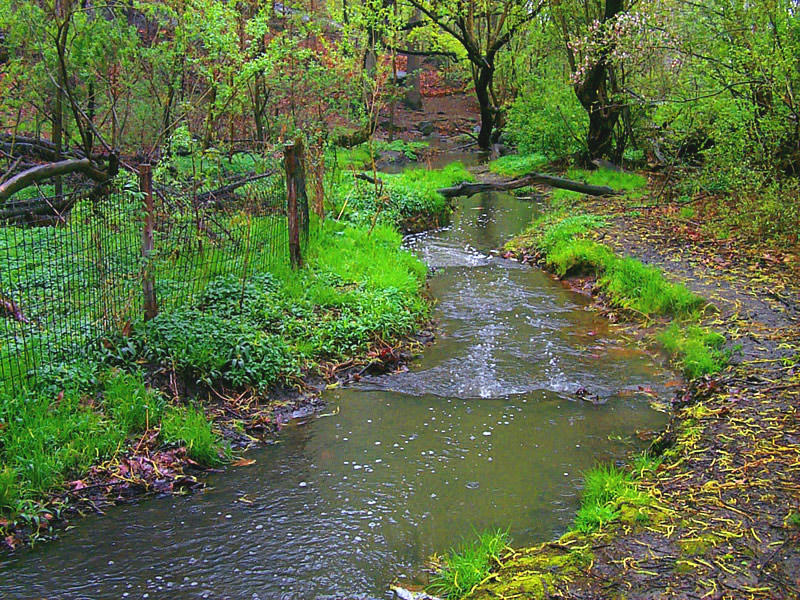 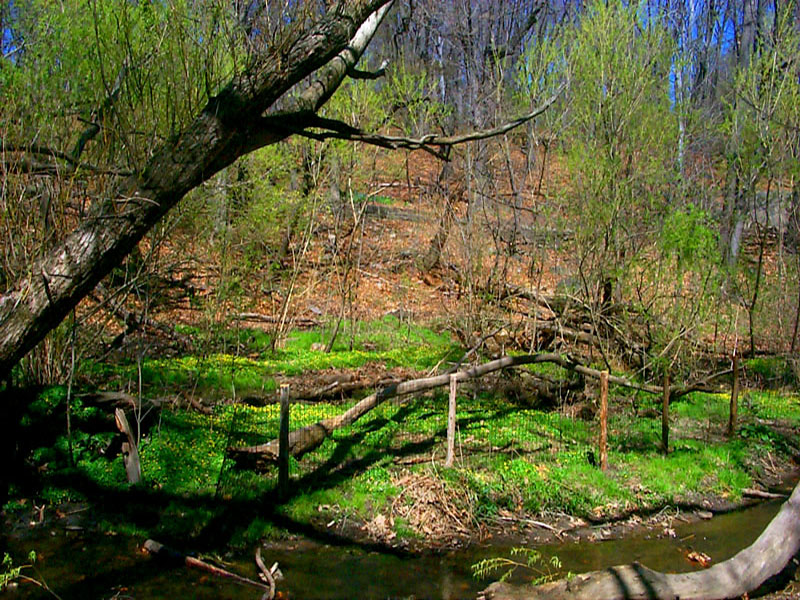 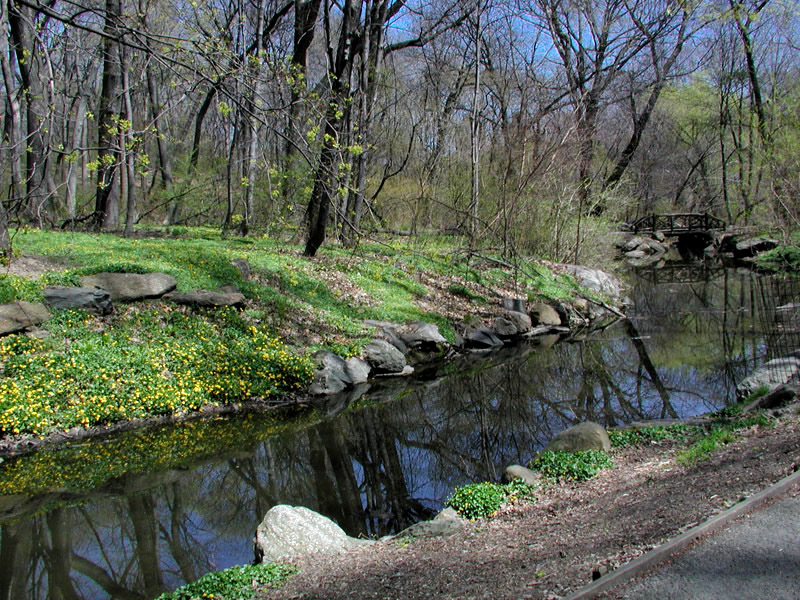 The Loch To Loch Bridge 31 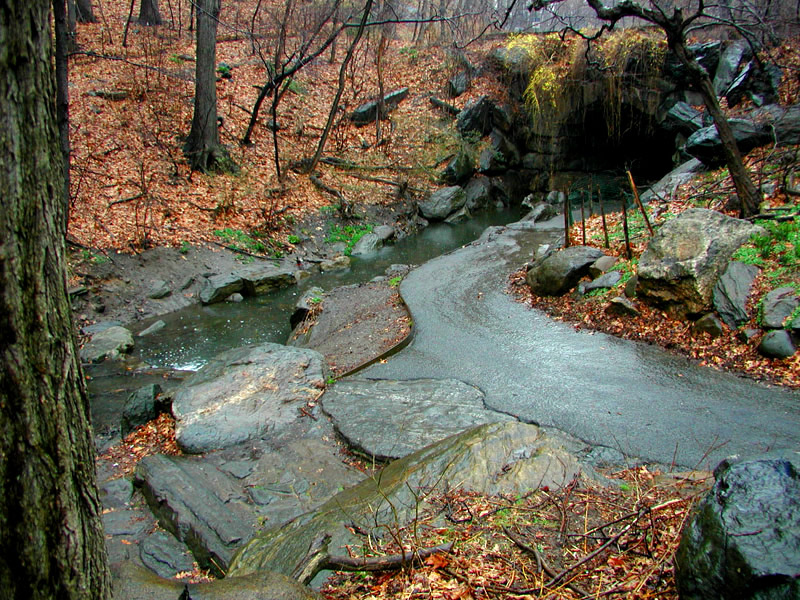 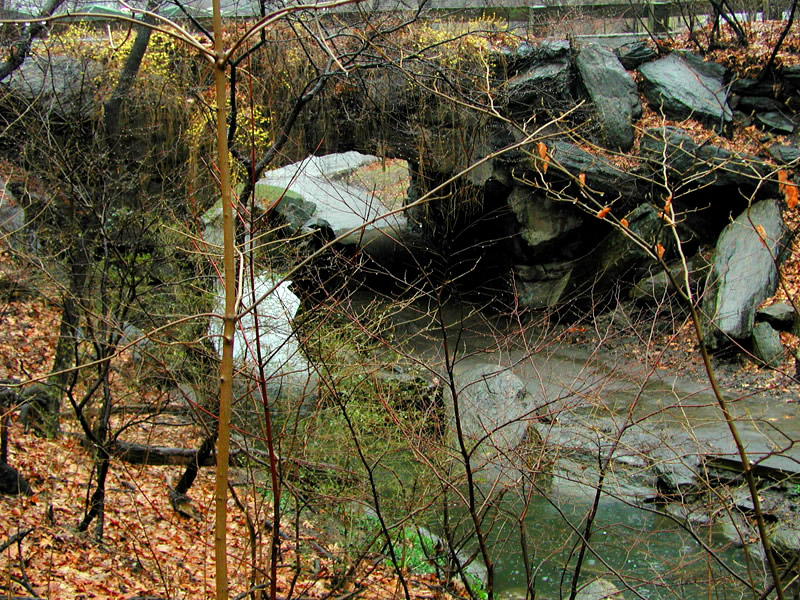 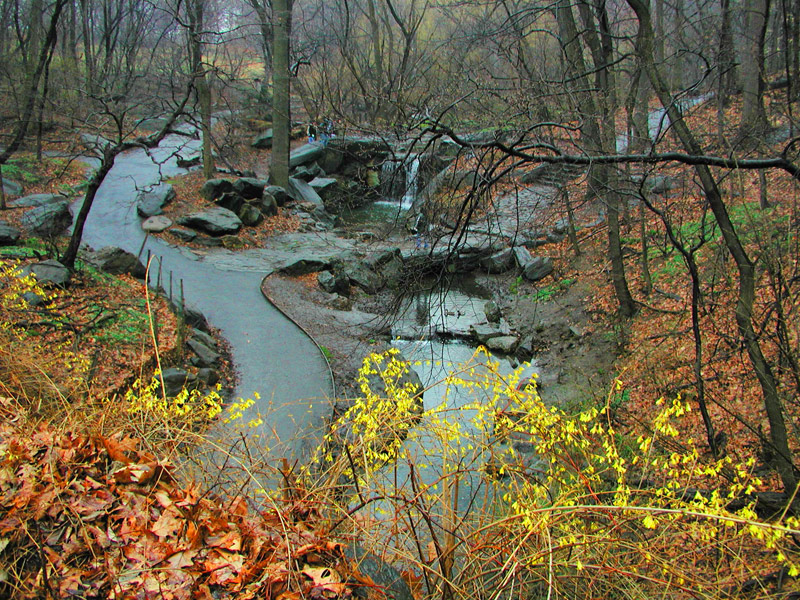 Cascade At The Huddlestone Arch